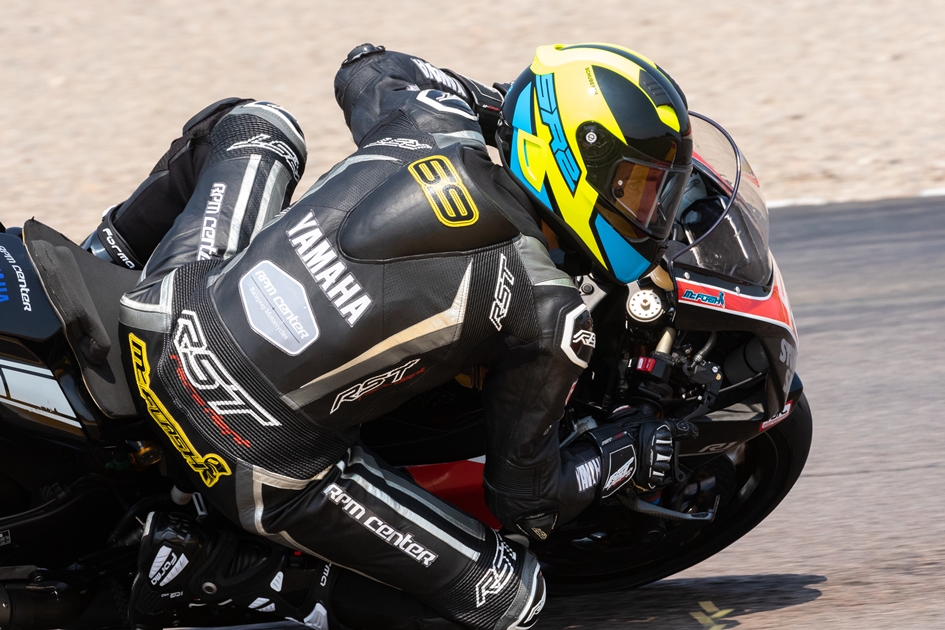 David McFadden gave the RPM Center Race Team its first two wins of the season when he won both 1000cc class heats at the opening round of the 2020 SA Superbike Championship held at Zwartkops Raceway on Sunday, 2 February. Brett Roberts, out for the first time on the national stage on his Lights by Linea Yamaha R6, battled with brake problems but did come away with a hard-fought fourth in the second 600cc class heat.

The team made their way to Zwartkops on Thursday morning for the practice sessions before the cars took over the circuit for the next two days. Both McFadden and Roberts were happy with the day’s results and spent the next couple of days relaxing before returning to the track early on Sunday morning.

In the morning warm-up session, both riders did just a couple of laps to make sure nothing had changed between Thursday and Sunday. Just over an hour later it was time for qualifying. Things were very close at the top of the 1000cc class timesheets with McFadden having to settle for third place, just over a tenth behind pole man and defending champion Clint Seller.

Roberts didn’t have as good a qualifying session as his teammate. Brake fade after a couple of laps meant he couldn’t improve on the time he set in his second tour and he had to be content with fourth place on the 600cc class grid.

A good start by McFadden saw him tucked in behind Seller at the front of the field at the start but the hot conditions and slightly slippery track caught Seller out on the second lap. He fell, handing the lead to McFadden. After seeing what had happened to Seller, McFadden was aware that he needed to be careful but still wanted the win. A great dice between McFadden and fellow Capetonian Lance Isaacs then ensued, with McFadden able to repel everything that Isaacs threw his way to give the 2020 Stunt SA Yamaha R1 victory on its first outing.

The brake problems on Roberts’ bike returned in his first race and he had to use all skills that he learned on the motocross track as he somehow managed to keep his Yamaha R6 upright while sliding sideways through the gravel on the outside of turn 6. He brought the bike back into the pits where his crew set about solving the problem.

The track was even hotter by the start of the second race. McFadden again slotted in behind Seller at the front of the 1000cc field, but soon realized he was quicker than the reigning champion. Shortly before half distance, he made his move and took the lead, quickly opening up a two-second gap which he was then able to manage until the flag.

Hard work by his pit crew in between the races meant that Roberts had a bike that would stop when he wanted it to. After a couple of laps at the start of the second race, where he made sure everything on the bike was performing as it should, he started pushing and worked his way up to the back wheel of Ricardo Otto who was in third place. The pair spent the rest of the heat in a great dice, with Roberts leading the way for much of the second half of the race. Unfortunately for Roberts, Otto’s greater experience told and he got through at the final corner to snatch the final podium position.

After the races, a very happy McFadden said, “The bike felt good on Thursday and we were confident that we would be on the pace today. So it proved. It is fantastic to walk away with a double win on the bike’s first outing. We will now be able to do a bit more development before we come back here next month.”

Commenting on his first national outing, Roberts said, “Brake problems in qualifying and the first race spoilt my day a bit, but I am very happy with my performance in the second race. Challenging for a podium position in only my second national race was very satisfying and hope to do the same thing next time out.”

The team will return to Zwartkops Raceway on 14 March for the second round of the 2020 championship.

In addition to the sponsorship from Stunt SA and Lights by Linea, the team acknowledges the support received from RST, Nix Graphics, Arata by Racetec, Forma Boots, TBR Engineering and Schuberth Helmets.