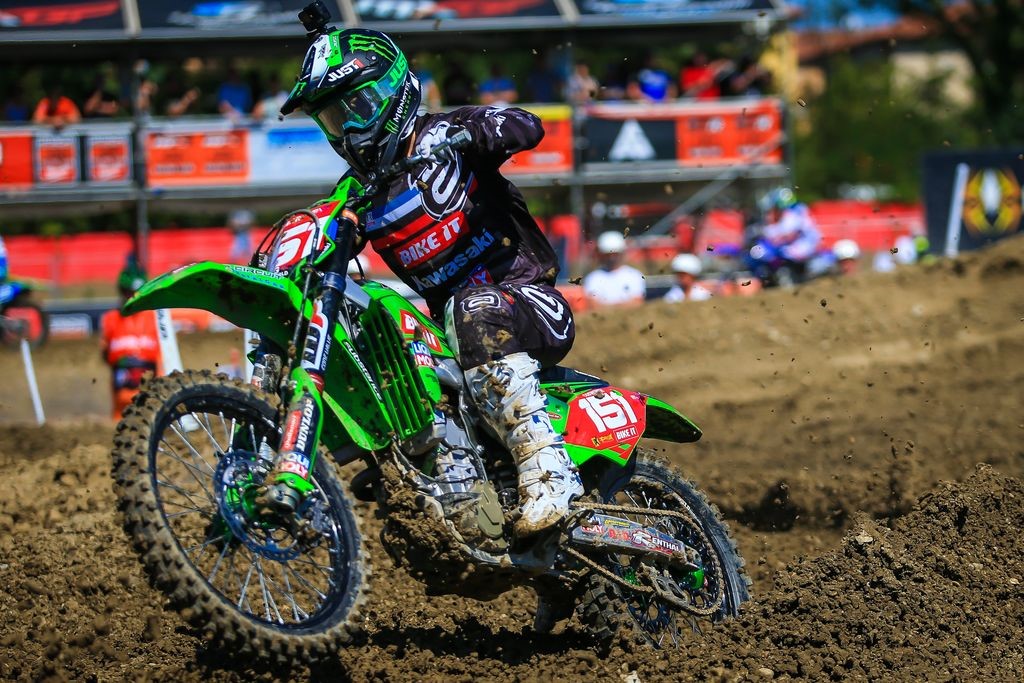 IMOLA (Italy) 18 August 2019 – The iconic Autodromo ‘Enzo and Dino Ferrari’ of Imola hosted the penultimate round of the FIM Women’s Motocross World Championship where Bike It DRT Kawasaki’s Courtney Duncan has gone 1-1 winning her third round of the season. Second overall was Larissa Papenmeier with 2-2 scores and third No Fear Yamaha team’s Nancy Van De Ven with 3-4 scores.

Now with just one round remaining in Turkey on September 7, Duncan holds a 23-point lead over Papenmeier with Van De Ven a further three points back in third place in the championship.

Series leader Duncan had a soft collision in the first corner of the opening Women’s Motocross World Championship and a bunch of riders went down. With the carnage behind them, Van De Ven led from Duncan, but the New Zealander took the lead quickly.

Duncan then crashed and handed the lead back to Van De Ven. On a mission Duncan caught and passed Van Der Ven, but then the Dutch woman looked like she had trouble with her bike and was passed by Papenmeier. Duncan won it from Papenmeier and Van De Ven.

In the second Women’s Motocross World Championship race it was Van De Ven who took the lead from Duncan, Papenmeier, Sara Anderson and Line Dame and Papenmeier was all over Duncan for second place.

Anderson started putting a lot of pressure on Duncan, and the Danish rider passed Duncan for third place and also looked for a way past Papenmeier.

Duncan, who was again the fastest girl on the track, moved into second on lap seven and was right onto Papenmeier. Duncan moved into the lead and was never headed again, Papenmeier finished second and Verstappen third.

Courtney Duncan: “I am very happy this weekend, one of the hardest races for me. I struggled all weekend and to come away with two wins is really good, so I couldn’t be happier. It wasn’t an easy one that second race. I was riding cautious. I saw Papenmeier in front and I could catch up. I wish to thank everybody who is supporting me.”

The Final Round of the 2019 FIM Women’s Motocross World Championship is taking place in Afyon, Turkey on September the 8th.