ITALIAN ANTHEM FOR IACOPI IN IMOLA 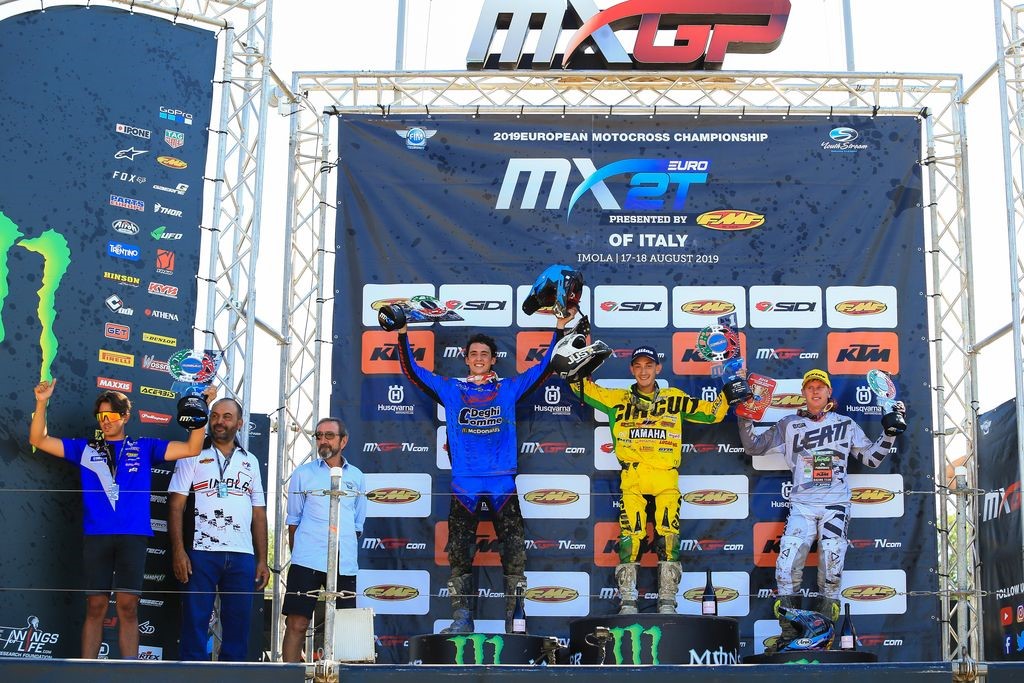 IMOLA (Italy) 18 August 2019 – The penultimate round of the EMX2T Presented by FMF Racing took place in Imola, Italy where the Italian wild card JK Racing Yamaha’s Manuel Iacopi had his first race win and his first overall of the career with a stunning 1-1 performance. Second overall was Gianluca Deghi with 2-3 results, while the third position belonged to the new red plate holder Verde Substance KTM team’s Brad Anderson with 5-2 scores.

The local rider Manuel Iacopi was just too good for the two championship contenders Brad Anderson and Ecomaxx Fuels Mike Kras who are even now in the standings both with 235 points as the championship will be decided at the final round with just one round to go in Afyonkarahisar, Turkey on September 7.

In the opening EMX2T championship presented by FMF Racing race on Saturday it was Iacopi who took the holeshot, and led Pier Filippo Bertuzzo, Kras, Andrea Gorini, and Deghi into the first lap. Anderson was back in sixth place and tried to work his way past riders to get to Kras.

Iacopi led into the second EMX2T championship presented by FMF Racing race from Anderson, Matteo Del Coco, Bertuzzo and Emanuele Alberio in fifth. Kras was down in the first lap and found himself back in 29thspot. As Anderson pushed his way into first place, Kras was up to 20thplace on lap one.

After two laps the lead by Anderson was a second ahead of Iacopi, with Del Coco third. Kras continued to move through the pack and was 17th on lap two. Iacopi moved back into the lead on lap four as he passed Anderson, and Kras was up to 13th position.

Iacopi extended his lead to more than two seconds on lap five over Anderson, and Kras moved into the top ten, doing an amazing job considering he‘s been suffering an injury to his left leg. By lap 10 Kras was up to sixth place, and Iacopi led Anderson by more than four seconds.

With the race getting close to its ending, Anderson started to close up on Iacopi, and Kras was right onto the back wheel of Bertuzzo for fifth place. Iacopi though turned up his speed and moved away from Anderson on the final lap, eventually winning race 2 and getting his first overall victory in his career from Anderson and Deghi while Kras finished fifth.

Manuel Iacopi: “It is a great weekend, both the first and second races were perfect. In race 1 I took the holeshot and it was an incredible feeling, then I had the lead the rest of the race. No holeshot in the second race, but I’m super happy to win my first overall.”