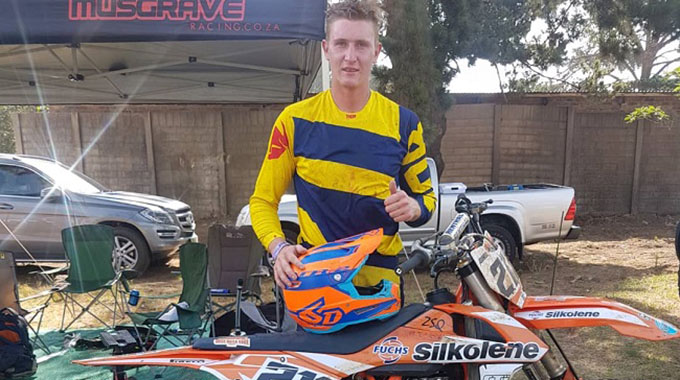 FORMER Zimbabwe senior champion rider Jayden Ashwell will lead a strong 56-member Zimbabwe team at this this year’s FIM Africa Motocross of African Nations Championships which will be held at Donnybrook in Harare on August 31 and September 1.

The FIM Africa Motocross of African Nations is an annual event which usually attracts all the top riders from seven African countries — Angola, Botswana, Kenya, South Africa, Uganda, Zambia and Zimbabwe — who compete for the top honours in all the classes from the PeeWees to the main MX1 Class.

This year will mark the 20th anniversary of this championship which was held in Botswana last year. Zimbabwe last hosted this event in 2015. And the Bogwheelers Club, who run the motorcycling sport of motocross in Zimbabwe, have named a strong 56-member Team Zimbabwe that will represent the country at this exciting two-day event and the team will be led by MX1 Class rider Ashwell (23), who is now based in South Africa. Ashwell takes over the captaincy of Team Zimbabwe from Ashley Thixton who has also been included in the same team despite his relocation to the Democratic Republic of Congo a few months ago.

At this year’s African Championships, Ashwell and Thixton will represent Zimbabwe in the main MX1 Class together with Hamish Perry, Frik Prinsloo and Cameron Thixton.

Two of the country’s most exciting junior riders Emmanuel Bako and Daiyaan Manuel are also part of Team Zimbabwe for the same event and will be fighting for the top honours in the 85cc Class where they will be joined by Jamie Doran, Ricky Whyte, Tristan Versveld, Dilan Faasen and Joshua Halkier.

On Sunday, Bako came second behind Manuel in the 85cc Class during round four of the National Championship series at Donnybrook. Interestingly there are three members of the Bako family in Team Zimbabwe for this year’s Africa Championships – Emmanuel, Munyaradzi and Junior.

Team Zimbabwe for the 2019 FIM Africa