BOU AND BRISTOW WIN IN PORTUGAL! 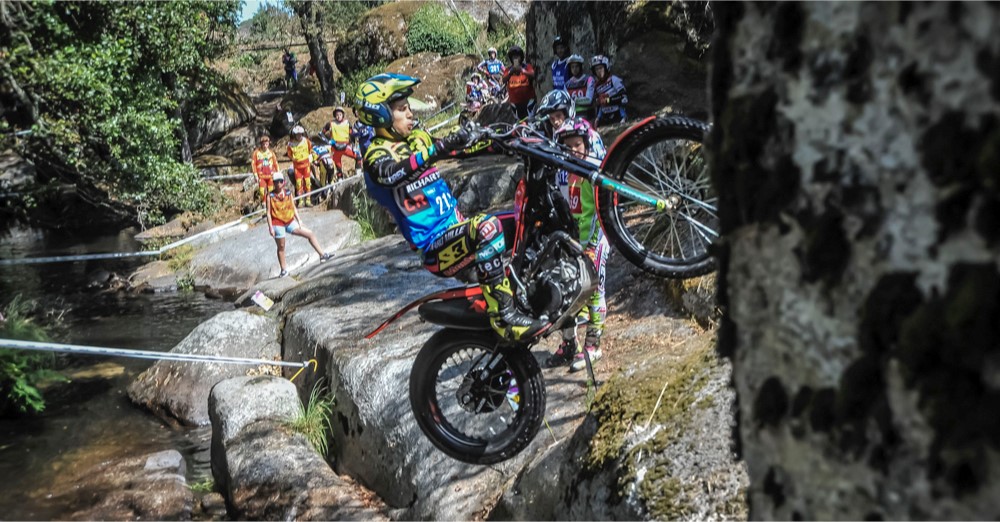 In a relatively low-scoring event, Bou’s eventual winning margin over fellow Spaniard Adam Raga (TRRS) was seven marks – the same advantage Bristow held over Berta Abellan (Vertigo) at the end of the day.

The majority of the 15 sections involved massive, grippy boulders but there were also five hazards plotted in a river bed and while the boulders here were still huge, when wet they offered little or no grip. The toughest section included an enormous double step that took maximums from every TrialGP rider apart from Jorge Casales (Vertigo) who managed to escape with a three on his final lap.

Bou began the Trial going toe-to-toe with his Japanese team-mate Takahisa Fujinami but eventually broke clear to record the best opening lap score of 15 – although four time penalties when he was forced to queue drastically reduced his advantage. However, as we’ve seen countless times before, he was able to raise his game when it mattered and his second lap total of six was good enough for the win.

“I had a little problem with the time,” said Bou, “but with my best second lap of six it was perfect for the victory and I think it is a very important win.”

Spain’s Jeroni Fajardo (Gas Gas) completed the podium on 36 marks lost, three ahead of Casales and four clear of Fujinami.

In the TrialGP Women class, Bristow maintained her unbeaten record with another victory but it was much, much closer than at TrialGP Japan where she dominated.

The British rider, who is aiming to win her sixth straight title this season, was forced to battle all day with the Spanish pairing of Abellan and Sandra Gomez (TRRS). Just four marks separated the leading trio following a close opening lap that saw Bristow ahead on 18 followed by Abellan on 19 and Gomez on 21.

Bristow then moved up a gear on lap two, dropping her score to 14 for a total of 32 as Abellan added an additional 20 with Gomez slipping off the pace and coming home in third on 49.

“Today I felt like I was fighting hard and nothing seemed to go right,” said Bristow. “I drowned my bike in the fifth section and got behind and didn’t think I’d be able to finish the day so I’m happy to win. My riding could have been better but, yes, I was fighting.”

Italy’s Alex Brancati (Beta), last year’s Trial2 Women champion, underlined why she’s undoubtedly a rider to watch out for in the future with a career-best fourth a further 10 marks behind as Ingveig Hakonsen (TRRS) from Norway rounded out the top five on 61.

Gabriel Marcelli (Montesa) took victory in the fiercely-contested Trial2 class to go with his win at TrialGP Netherlands last month but he only got the decision on a most-cleans tie-break with France’s Alexandre Ferrer (Sherco) after the pair ended the day locked together on 23 marks with both also incurring three time penalties.

“Today was not an easy day for sure,” said Marcelli. “We finished first at the end and I’m so happy. It’s perfect for the standings in the championship and at the moment I am second and so close to the leader.”

Italy’s Lorenzo Gandola (Vertigo) was third on 25, just one mark ahead of Jack Peace (Sherco) from Britain. Spain’s Francesc Moret (Montesa) led Ferrer by one following the opening lap but he was unable to up his game on lap two and finished fifth on 27.

When scores are low, the smallest mistake can prove extremely expensive and defending champion Matteo Grattarola (Honda) – despite losing just eight marks more than the winner – slumped to seventh and it was even worse for title contender and yesterday’s Qualification winner Toby Martyn (Beta) from Britain who finished in 10th.

The result means that Marcelli has now slashed Grattarola’s series lead from 14 points to just three with only two rounds remaining.

Minta had held a narrow lead after the opening lap with her score of 15 putting her three marks ahead of a three-way tie for second between Wachs, Lenna Volpe (Sherco) from France and Germany’s Sophia ter Jung (TRRS).

Wachs then rode out of her skin on lap two to claim a four-mark win from Minta with Volpe taking the final step on the podium on a total of 35, seven ahead of fourth-placed Caroline Moreon (Sherco) from France and 11 clear of ter Jung whose costly second lap was compounded by an additional time penalty.

The next stop on the FIM Trial World Championship tour is TrialGP France next weekend at the Alpine resort of Auron.