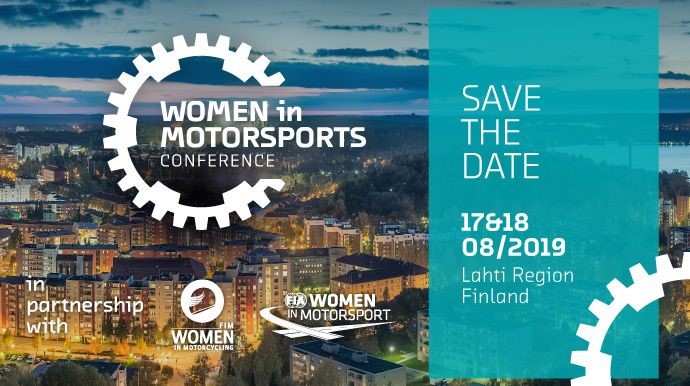 The FIM and FIA Women’s Commissions have united their forces to organise the first ever joint Conference for Women in Motorsport. The conference will be held in Vierumäki, Finland on 17 and 18 of August.

Finland will also be under the spotlights with nationals who have made their way to the top of motorsports. Formula 1 Coach Tommi Pärmäkoski will explain what training at the highest level requires, Emma Kimiläinen will share her experience as driver in the new women’s W series, the women’s class winner of the International Bridgestone Handy Race Championship Ulla Kulju will inspire the audience with her story of overcoming obstacles with her handicap and Niina Toroi together with Emma Terho will bring the Olympic Committee’s point of view on the role and place of women in sport.

The conference with over 30 speakers from all over the world will provide unique opportunity to discuss the challenges and latest trends concerning women in motorsports and give a great opportunity for networking.

“We have been discussing with Michèle (Mouton) for quite long time about organizing an event together. Now with the help of the city of Lahti we have the perfect opportunity. The conference will be held the weekend before the official MotoGP tests at the new KymiRing circuit and will take place in the beautiful Vierumäki Conference Center close to the circuit. We believe that speakers will not only inspire and astonish the audience with their stories but they will also provide concrete answers to important questions such as how to get young people involved in motorsport, how to develop gears for women and what is the future in motorsport and importance of electric series such as MotoE and Formula E.”

“Since we formed the FIA Women in Motorsport Commission we have collaborated with our FIM Women in Motorcycling colleagues, sharing ideas, best practices and learning about the challenges women face in our respective sports. We have seen from previous activities that when we combine resources we can make an even bigger impact. We are delighted to be co-hosting this first world conference and I am convinced together we can help to increase the participation of more women in both four and two-wheel drive mixed motor sport.”