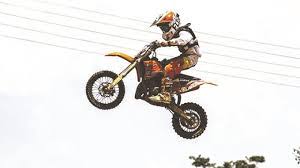 There was no stopping for two of the country's top junior motocross riders Emmanuel Bako and Daiyaan Manuel during Round Four of the 2018 Bogwheelers Club's Club Championship series at Donnybrook in Harare on Sunday where they dominated the proceedings in the 65cc and 85cc classes.

Sunday's event was used by some of the country's top junior and senior male and female riders to fine-tune themselves ahead of the 2018 FIM Africa Motocross of African Nations Championships ,which will be held in Kitwe, Zambia from August 17 to 19.

The Bogwheelers Club, who run the motorcycling sport of motocross in this country, recently picked a strong 42-member Team Zimbabwe for these championships and Bako (12) and Manuel (13) are part of this team; and the two talented young riders were once again in dominant form during Sunday's club event at Donnybrook.

Bako emerged as the top dog in the 65cc Class, while Manuel took the first step on the podium in the 85cc Class after they both produced some brilliant riding skills in their respective classes.

Bako arrived at the track on Sunday fresh from topping the overall podium in the 65cc Class during Round Four of the 2018 South African National Championship series at Terra Topia in Johannesburg the previous weekend and he picked up from where he left off in the "City of Gold" by sweeping the board in the same division at Donnybrook.

A much revived Bako definitely showed his prowess in the 65cc Class where he won all his heats, but also had his work cut out for him in the 85cc Class in which he was beaten into second place by the overall winner Manuel.

In fact, the 85cc Class proved to be the race of the day, with a four-way battle for the top step on the podium between Manuel, Bako, Ricky Whyte and the country's top female motocross rider Tanya Muzinda (13).

The day finally belonged to a fired-up Manuel, with Bako, Whyte and Muzinda settling for second, third and fourth place respectively in the 85cc Class.

And after securing two places on the podium at the end of business on Sunday, Bako thanked his manager Scot Sakupwanya for his "blessings and guidance" on the track.

Sakupwanya is, on Friday, scheduled to leave for the United States where he will meet some "potential sponsors" for his prodigy Bako.

Bako's younger brother, Junior, also had a good day in the office on a chilly Sunday where he won all his heats in the PeeWee Class, which is designed for riders under the age of seven, while his cousin Munyaradzi did well to come fourth overall in the 65cc Class.

Reply Hymnady
2:08 PM on November 13, 2022
where to buy clomid trusted site Stage IB The cancer has spread halfway or more through the myometrium

Reply Atteprevy
11:54 AM on November 10, 2022
Furthermore, a new understanding of acetylating agents for chemotherapy sensitization to treat drug resistant cancer cells such as TNBCs can be proved preclinically in vivo common side effects tamoxifen Ollie aqtRvFcRXZrYFFojsF 5 29 2022