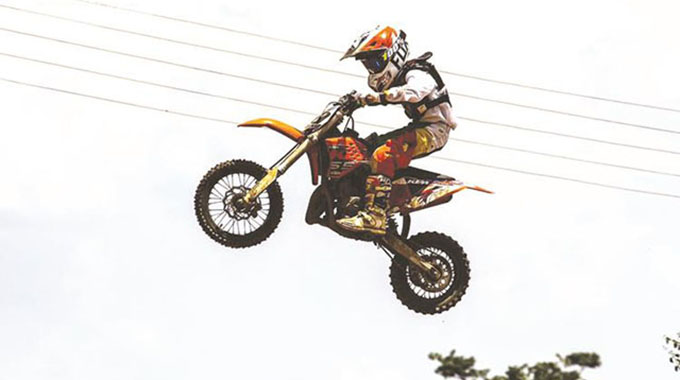 One of Zimbabwe’s top junior motocross riders Emmanuel Bako shot to the top of the 65cc Class Standings of the 2018 South African National Championship series after producing another solid performance during Round Four of this tough seven-round motorcycling competition at Terra Topia in Johannesburg on Saturday.

Bako (12), a Grade Six pupil at Heritage School in Harare, also got his red plate back after taking the top step on the podium at the end of business on Saturday where he put a strong field of 31 young riders, who competed in the 65cc Class, in his shadow as he stamped his authority in this division.

He also came second overall in the 85cc (Juniors) Class to crown a memorable day for himself.

The talented young Zimbabwean rider went into Saturday’s event trailing South Africa’s Lucca Mynhardt by just four points in the 65cc Class Standings of the 2018 South African Nationals and there was a close battle between the two as they fought for the first step on the podium.

According to reports from Terra Topia, this race was “not cheap” for Bako as the South African riders, who were in the 65cc Class, were out for his scalp and were coming hard at him after he beat them in a pre-national event at the same venue the previous weekend.

And from the start gate in Heat One, Bako got a bad start but he managed to fight hard from fifth place to finish in third position behind Barend du Toit and Wian du Plooy.

The script did not change in Heat Two which saw Bako having another bad start and this saw him lying in sixth place at one stage but he “miraculously” upped his game to sweep past the five other riders in front of him to finish in first place and was crowned the overall winner of the day in the 65cc Class with 45 points, getting back his red plate in the process and shooting to the top of the group standings ahead of Mynhardt with three more rounds to go in the series.

Du Toit and Mynhardt came second and third overall in the 65cc Class on Saturday.

And after sweeping to victory in the 65cc Class, Bako was not yet finished as he was involved in another “Batlle Royale” with two of South Africa’s top junior riders Luke John Grundy and Wesley McGavin in the 85cc (Juniors) Class.

In this class, Bako started well, getting in front of Troy Muraour of South Africa and he led all the way until towards the end of Heat Two when he thought his bike had a flat tyre and he stopped to check it, and this allowed the chasing pack to pass him.

But Bako quickly got back onto his bike and gallantly fought his way back to finish in second place and came second overall in the 85cc (Juniors) Class behind Grundy.

And Bako’s father and manager, Brighton, was happy with his son’s overall performance, especially in the 65cc Class in which he managed to topple Mynhardt from the top of the group standings.

“We are so happy that we got the red plate back and that Emmanuel is now leading in the 65cc Class Standings of the South African Nationals. He just needs to be focused and practice much harder before we head out to Cape Town next month for Round Five of the series.

“He really needs to work much harder because Cape Town is Lucca Mynhardt’s home town and track; and he will be itching to gain some measure of revenge over Emmanuel,” Brighton said from Johannesburg on Saturday.

Emmanuel was also over the moon following his brilliant performance on the track at Terra Topia and he thanked his new team manager Scot Sakupwanya, his Zimbabwean trainer Stanley Mugiyo and mechanic Lawson Chigariro for their continued support.

“I would also like to thank my trainer at Team Vision Racing Team, Grant Florey, for his wise advice and above all, I would like to thank God for his protection and guidance,” Emmanuel said after Saturday’s race meeting.

But unlike Bako, the story was not that rosy for Zimbawean compatriots — Ashwell, Thixton, Wasmuth and Cocker.